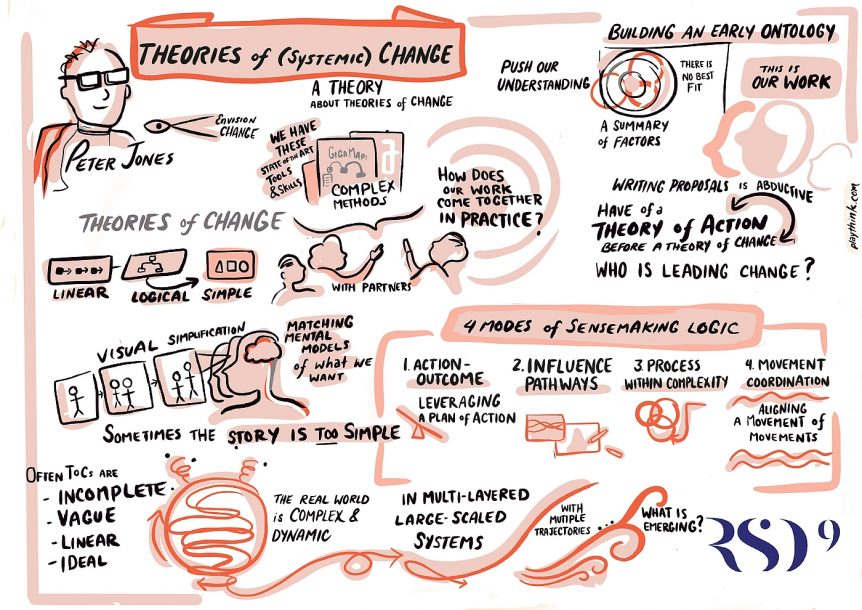 Theories of Change (ToC) are well-known in changemaking initiatives and program evaluation as structural models that represent the expected enactment of proposed change programs. They are logic models that portray proof of process that present the sequences of action and the desired outcomes to justify systems change programs.

With a research collaborator Ryan Murphy (PhD student, OCAD SFI alum) we have been tracing an emerging research agenda this year to explore the systems theory basis for theories of change. We are starting with critiques of the formalist logic models used in change programs to define claims of social causality from proposed action plans and aim to design systemic approaches to improve visual narration, systems logics, and reliability.

Also of course see the work proceeding from the “other Toronto school,” the research agenda on System(s) Change(s) from David Ing and collaborators from the Systems Thinking Ontario community of practice. (Ryan and I just presented our RSD9 talks at the ST Ontario for the November meeting – I can share my presentation deck from my talk Redesigning Theories for (Systems) Change here.)

We never set out with a mission to investigate the venerable Theory of Change. We discovered in other projects we – both – converged on the gaps in systems theory and current thinking about this critical and commonly used technique. When using the term of art “Theory of Change” in a scholarly context, I continued to feel we were using a kind of folk craft with a fancy name. We wanted to explore their types their uses, and determine whether there was in fact a serious epistemology and felicity conditions for ToCs in the systems literature.

If you work with large-scale systems change, write proposals, if you work with NGOs, philanthropy or the social sector, you will have developed some theory of change for a proposed initiative. For the RSD9 talk last month, I took a second order (and third order) perspective – what are the ToC models experts actually use, how are they best applied, and what commitments do they actually make with respect to systems change theory? (The 3rd order conversation is more “how should we as the RSD community improve the practice?”)

And furthermore, what are the meanings, purposes, effectiveness, basis in systemics, their common applications, uses and misuses of Theories of Change?  Both systems and design studies deal constantly with theories of change (TOC), whether or not they are explicitly presented in program reasoning and design briefs.

We can observe from the practice of constructing change logic models that the presentation of a preferred theory of change represents an advocacy for adoption of a common narrative shared by changemakers in a social system. The acceptance of a theory of change denotes the adoption of a systemic model for a preferred outcome, especially in the types of social change projects supported by philanthropy.

Theories of change are developed using a visual formalism of a logic model, representing a proposed template for action toward outcomes. The endorsement of a given ToC is sustained by persistent reference to it within organizational discourse, in a shared language between an organization and its sponsors or stakeholders, and through the presumption of individual updates to mental models. In this way the theory of change becomes a socially constructed artifact.

The users of ToCs have expanded from funding agencies (many of whom are known for requiring a logic model of change with applications) to impact investing, normative social research, government policymakers. The provision of a working theory and logic model was presumed to represent an empirical and measurable basis, encoded in causal logic, to define how a program’s implementation would develop or result in preferred definite outcomes. However useful these models might be for the organizations involved, the pragmatic effectiveness and the theoretical support for such models is open to question. As systemic designers, we are expected to be familiar with or to develop sophisticated logic models demonstrating effects and outcomes of change interventions. What should we know about the state of the art of ToC and the systemic reasoning for their rationale?

In social innovation studies, Paul Brest (2010) discusses both their value to philanthropy, and their issues, and the responses from “skeptics and agnostics.” Agnostics in particular raise the questions to which systemic designers should be attending:

“They believe that it is difficult to create a meaningful theory of change because social problems are complex and ever changing. Rather than spending time and money trying to craft or assess theories of change, agnostics think it is more productive for funders and grantees to focus instead on building great organizations.”

We might consider this outlook representative of any change model however. There are tensions between direct action (that benefits from relationship and learning) and designed interventions (that benefit from analysis of leverage anticipated to effect long-term impacts).

Typically, systems approaches value and build upon systemic reasoning from careful observations, such as leverage analysis of complex systems to determine the most productive investment of efforts or programmatic support. Complexity approaches favor more short learning interventions, coordinated iterations, and experiments to deploy proposals as learning probes. Might there be systematic differences in supportive systems theories underwriting theories of change, if we analyzed their different applications?

A non-comprehensive analysis of theories of change reveals references across several application domains:

Remarkably, the expression “theory of change” appears to be consistently employed as a term of art in these different domains, even though their models are quite different. A small number of expressive models can be found and reproduced within and between these domains. The effective uses of logic models for ToCs might  be characterized as “working theories of relevant causalities for anticipatory sensemaking of future outcomes.”

The analysis provides a  framework for exploring the trade-offs (a trade space) between the underlying models of change, based on their system-theoretical underpinnings. The most common change models across these domains were analyzed and isomorphism identified to evaluate their goodness of fit for the design of change logic in strategy development, in foresight-led planning and visioning, and systemic design for large scale system change.  The source models include:

Perhaps the two key contributions from the initial study and talks are the formation of a framework for Theories of Change that define the relative complexity of change process and the current approaches to sensemaking logics. These include (for now, as they could gain more elegant terms later):