Gigamaps and synthesis maps look very similar as finished products. However they differ in their developmental processes. Both are rich images that visualize complex system problems, and both are used as design artifacts in similar domains (from health to public policy, from service experiences to social change). Both are used with stakeholders for advising, planning, and designing for social and systemic challenges (wicked problems).

Due to the coursework setting in which these are trained, often without access to direct stakeholders, we employ generative and ethnographic research to design. These are then “first phase” system maps that synthesize research, perspectives, and design problematics into coherent visual narratives that make sense to stakeholders knowledgeable in these domains. Our hope with student work is to demonstrate the possibilities of synthesis maps to reveal systemics and propose design of future options. These become proposals for continuing with in-depth stakeholder work such as published by sLab to date. They serve to communicate complex concepts visually for service design, and as descriptive artifacts for presentation in conferences and publications.

Synthesis maps are particularly effective in representing multi-level social systems such as are common in healthcare – indicating an outer boundary (e.g., national or provincial system), the service networks, agencies and specialized providers within a care context, for example. SFI student teams have also delineated sophisticated dementia journeys, evolution of health equity, and the developmental pathways of childhood obesity.

The Gigamap technique was developed by BIrger Sevaldson of the Oslo School of Architecture and Design, who we have collaborated with since 2011 in the development of systemic design methods and the RSD conference series. Observations of the AHO Gigamap Gallery shows their process develops a strong architectural and descriptive approach to complex projects, which are pursued through studio work using a research through design (RTD) process. The SFI maps have been developed in half-term courses guided by design-led field research and extensive secondary source references to build descriptive system maps as a mapping of territory for systemic design of the social systems of concern. We also develop a core systems theory or methodology within the SFI maps as a means of pattern and leverage. Because the process we teach is developed more as a synthesis of evidence and is informed by theory, our process is better considered as a Synthesis Map.

A recent synthesis map was created by an sLab team for the SSHRC-sponsored Canadian Governance in the Digital Era, with the resulting map (here reduced in size), published in the March 2015 issue of Canadian Government Executive. The map draws on both foresight and system thinking models within a horizon scan of trends, values and weak signals for future innovation patterns. 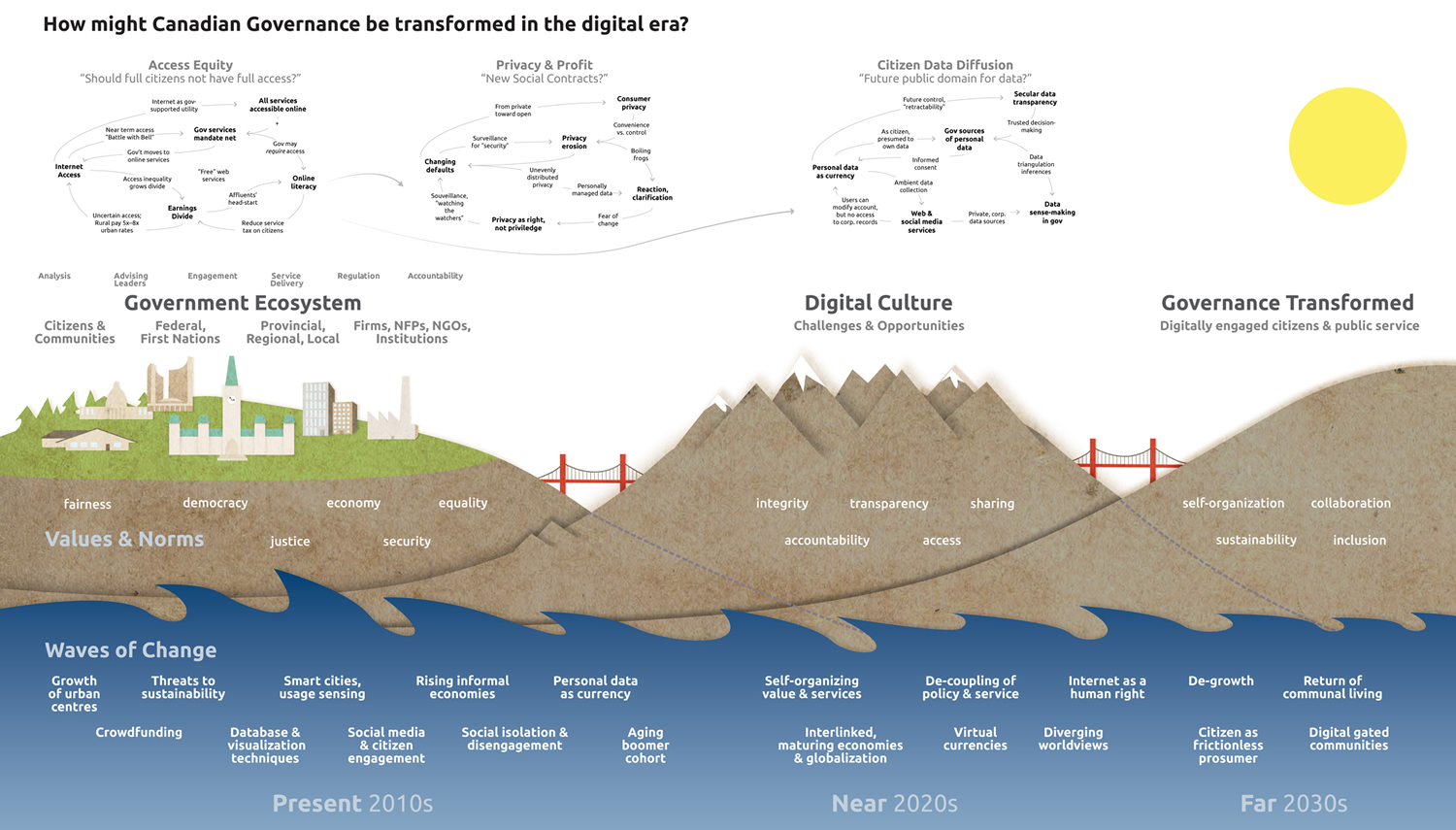