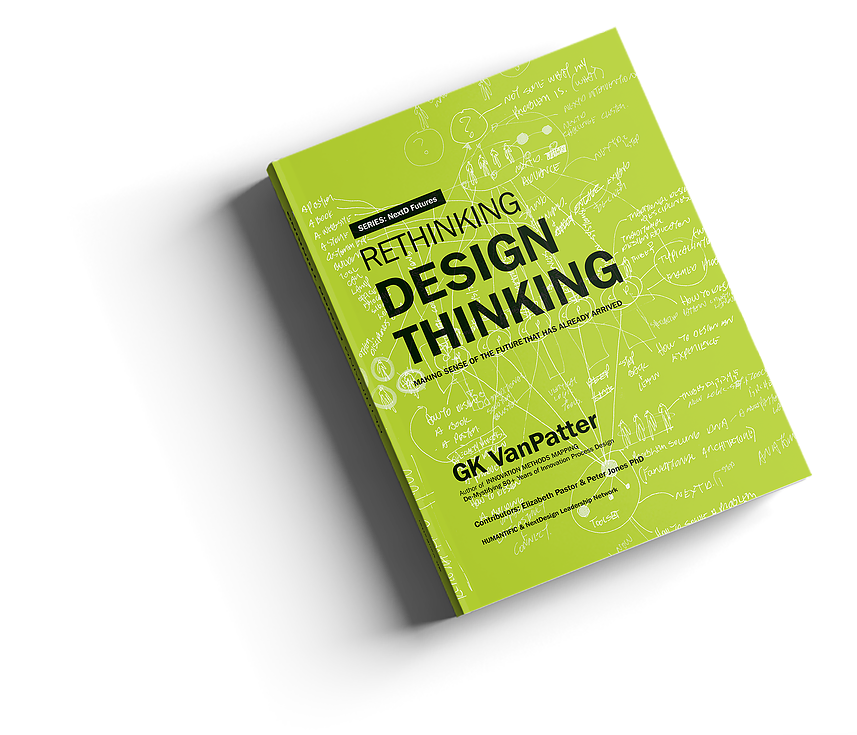 The design community is once again rethinking all the thinkings. It’s about time, as we’ve been through more than a decade after the last global crash and we are now at the start of the next, much longer crash, or the Long Crisis of the Anthropocene. This crash will be political, cultural and financial (unlike the 2008 Minsky Moment (credit implosion) based on the corrupt underpinnings of mortgage-backed securities). Will the design community and design education be prepared this time? Or will we be arguing about ideology and single-cause design activism?

Perhaps the compelling ideas of the prior decade are fuzzy by now, but we were busy bringing new design-led interdisciplines into schools and defying the complaints of those that insisted “design education must change.” It was changing – and now we’ve seen several hundred graduates from the OCAD University Strategic Foresight & Innovation MDes. We saw the rise and fall of Transformation Design that attended the hopeful resurgence of new design thinking. At the time, by 2010 at the latest, we were already arguing Design Thinking (the corporate training variety) was overdone. We were actively in the first round of rethinking Design Thinking.

We’ve recently attempted to recover the lessons from that time so that we might draw on the best ideas, and avoid the disciplinary failures. Recently I contributed to GK van Patter’s new book Rethinking Design Thinking – picking up a collaboration going back a dozen years. In the meantime I had also contributed to his Innovation Methods Mapping (2016).

(GK and I were moderators of the Transforming Transformation (Design) list in the mid 2000’s and were both on the advisory board in the formation of the OCADU Strategic Foresight & Innovation program (2007). He stepped away from the board, and as I had moved to Toronto anyway, I stayed on to become a professor.)

Rethinking Design Thinking reopens inquiries that we should continue in the broader community. The series of short chapters frames and aims for current relevance in several cross-cutting design discourses.

Design Geographies (1.0 – 4.0) – Incommensurable scales of design for challenge complexity
Methodology Traps, Ethics, Gaps, and Renewal – An inquiry into design methodology, in particular the open question as to whether design thinking has sufficient methodical power to address Design 4.0 challenge scale.
Methodology House on Fire – An essay on the swirl of urgency now coloring our engagements and discourse, the social pressure on design to “do something, anything” about the climate, technological, political, and financial crises that have breached critical threshold of urgency.

Problem (Not) Solving in Complex Challenges

A section of mine from the essay suggests the direction of discussion. “When there is agreement by mass media and mass audiences on a common problem recognition (problem finding), they are probably wrong.”

“We have trained designers that their role and goal is to be problem solvers, after four generations of design methods and philosophy that have evolved this perspective. You cannot expect to resolve challenges at the level of complex systems by applying problem solving methods. Even further, you cannot even begin making progress with the “solving” mindset.”

Consider the complex problem systems we call “climate change.” We oversimplify the staggering variety of material flows and inputs, cumulative errors and disruptions, planetary and solar dynamics, atmospheric and oceanic dynamics and narrow our policy focus to a single visible, vaguely measurable entity of energy emissions. And we use this bumper-sticker activist lens to “problem solve” every other issue in which citizens take part. I have to trust that policymakers are able to deal with a higher level of complexity than simply “tax the inputs to emissions and shift to renewables.”

We are dealing with a system of nonlinear effects from an unknowable multiplicity of factors and causes.  We have no way to step back into our primal industrial era to undo initial conditions. Reducing “inputs” at the level of emissions is merely counting what we can measure, reducing the count, and by measuring, believe we have made a life-saving difference.

For me the crux of the methodological trap suggested by GK is that, when people collectively become urgent, it is already too late to act on urgency. Our methods have to first address the pre-framing, the intense activist “do something” mindset that leads to feel-good projects, nicer aesthetics on yet another website and engagement platform. In advising digital product development,. we would calmly step back and determine whether a “real market” exists for your idea, and if a starter customer was found, whether they would pay. The equivalent in social change is whether your project is net-contributing to the “market” of change, or is yet another change group that tends to fragment attention or energy. (And social change projects need a temporal impact points, a real “so what, by when” and an exit plan, as most projects never see the result of action).

We tend to make huge mistakes – category errors – when acting under pressure and under the visibility of public optics. We take actions that look good at the time, for example, declaring climate emergencies when we have no plans or budgets for effectively repairing the municipal level and regional bioregion. (Again, the focus on climate instead of actual regional ecological issues can actually delay the work needed at local levels by focusing on some envisioned global impact that makes little difference to regional biodiversity or food webs).

Here I do speak as an advisor involved professionally with community and municipality-level climate change action planning, and a co-founder of Drawdown Toronto. We do have evidence-based and practice-learned ways to regenerate communities toward flourishing, But it takes time and collaborative dialogue to cocreate a community energy transition or climate action plan that has citizen support and will survive political changes. To just take action under pressure leads to irreversible mistakes, such as the installation of expedient tax policies (such as the diesel tax that triggered the rise of the Gilets Jaunes in France), because we can never admit that we chose the wrong path.