A team of faculty and grad students with the OCAD U Strategic Innovation Lab facilitated a series of civic and expert engagements for an ongoing SSHRC research project on futures of governance, led by PI Evert Lindquist of U Victoria.  The sLab contribution was to iteratively develop a Gigamap, a snapshot of which is shown here. A Gigamap is a large-scale visualization of the systemic relationships in the domain, in this variation of the technique, revealing participant’s understanding of the spectrum of changes influencing and transforming governance in the digital era.  The issue is not one of “digital governance,” instead our focus is on the systemic shifts anticipated within federal, provincial and local governance and citizen experience driven by the rapid alterations brought on by digital cultures.

The March issue of Canadian Government Executive printed and posted a story about the evolving Gigamap our team developed to reflect the contributions from policy experts, innovators, and interested citizens over three invitational workshops. The brief version of the story is available online: Systems evolution: A Gigamap by Greg van Alstyne. 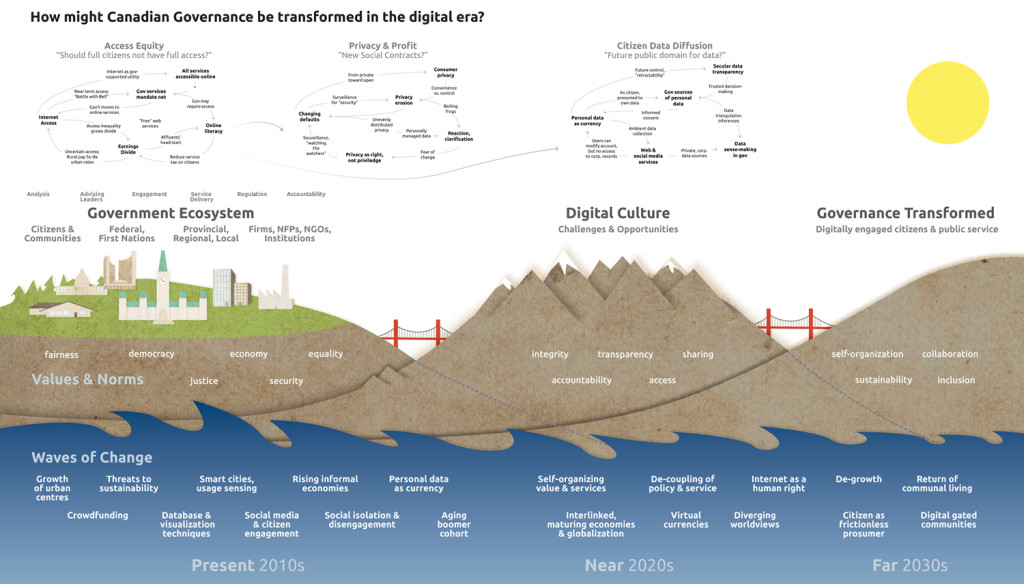 I teach the Gigamapping methodology to SFI students in our Systemic Design course, and we’ve learned that compelling maps of social systems require a project team to conduct a deep dive of research in the domain, to engage stakeholders and experts to understand the salient drivers, and to critique the developing artifact in iterative studio sessions to evolve the underlying system theory that best explains the observations. We’ve developed this technique from years of parallel discourses and workshops with the Oslo School of Architecture and Design (AHO), the lead institution in the annual RSD Symposium for systemic design research. Birger Sevaldson of AHO employs an in-depth studio practice to develop a series of maps as “snapshots of understanding” as they aim to map the complexity of a sponsor’s wicked problem. A large sample of their Gigamaps are displayed on their program website, Systems Oriented Design.

Several workshops were held from 2014-2015 that contributed narratives and “subsystems” to the map, with each contributing content and concepts, including:

A major stakeholder workshop in December, coordinated by the Institute on Governance, supporting by expert “lightning talks”, small group and Open Space workshops. The first Gigamap concept was presented here. employed as a visual template of a Three Horizons model to capture the progression from today’s tensions to tomorrow’s innovations.

We held the January Design with Dialogue on The Co-evolution of Connected Citizens in Canadian Governance, engaging a completely new group of 35 civic innovators in whole group dialogue and small group sessions to elicit influence maps on the important systemic relations for access, privacy, engagement, and open data (these are represented in the loop models inserted within the Gigamap above).

The DwD workshop preceded the major Ottawa summit event, sponsored by SSHRC and IoG, coordinated by the research team for engagement with government executives, public service innovators and academic advisors. Another evolution of the map was used as a template to collect ideas from the participants at the summit, and these were reviewed and developed in a one-day workshop at the Institute on Governance in Ottawa. 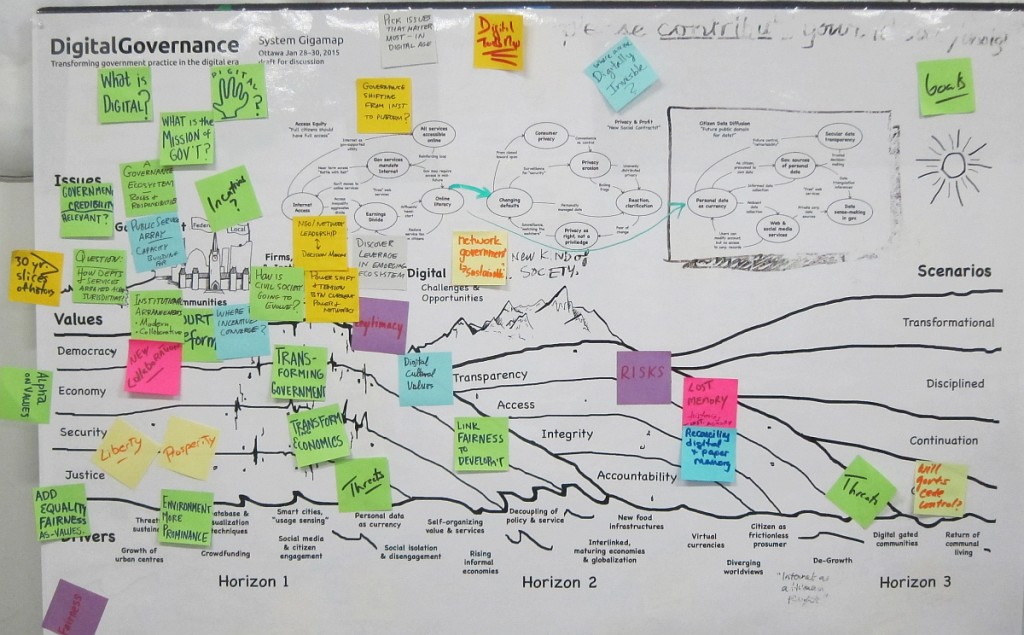