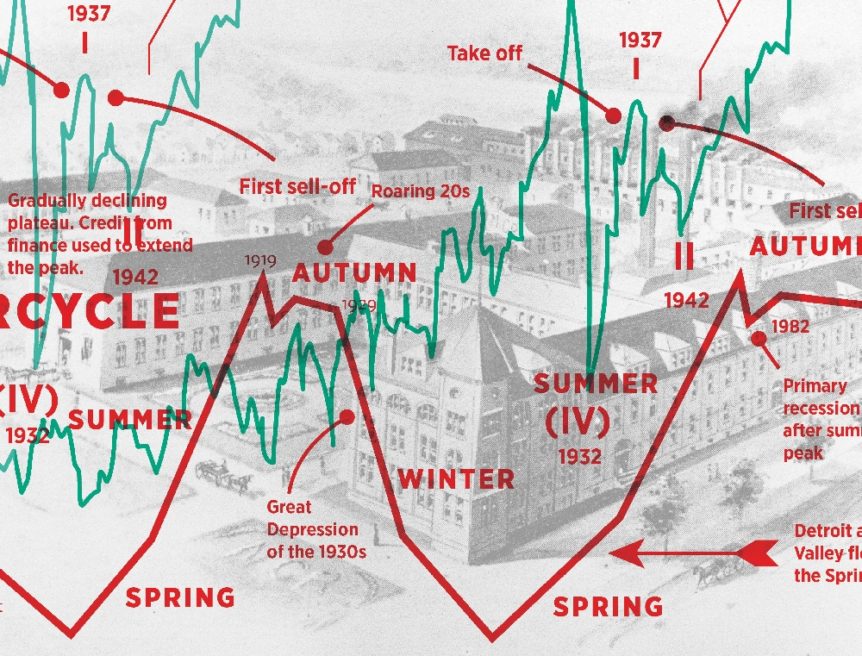 In a series of posts here, I’m continuing to discuss our Strategic Foresight & Innovation research after student graduation.

Neal Halvorsen completed his MRP Foresight Playback (Mapping the Future of Industrial Regions by Learning from Historical Cycles of Innovation) after conducting field research in my hometown of Dayton, Ohio. Dayton is almost 500 miles south of Toronto, following the 401 to I-75 South to  Detroit, Toledo, Lima, and then Dayton (a string of cities connected on I-75 to the auto industry).

Neal’s MRP on learning from historical cycles of innovation is at: Notably he draws on the mix of cyclic anticipatory models “Kondratieff, Schumpeter, Elliot waves and the Fourth Turning generational cycles are brought together to show how cycles of innovation and decline can be mapped over long periods, adding to the insights that other foresight methodologies can bring to cluster planning.” Uniquely. He integrates these to synthesize their complementary relationships over time, to examine historical patterns into contemporary era, and to suggest this model as a long-horizon planning system for innovation cluster foresight, strategic formation, and investment.

Neal’s Medium article:  Carving out a New Destiny: Dayton’s bid to lift itself up Neal wrote a Medium piece about his study and its continuing meaning in the context of Dayton’s visible references in US news: 1) The devastating weather event of seven F4 tornadoes on May 31, the mass shooting event in Dayton’s Oregon historic district by a deranged Bellbrook kid last August, and then the release of the PBS/Netflix film by old Dayton friends, called American Factory. All of these events last year affected my friends and relatives, to some extent (post-trauma sensitivity to the shooting, friends lost trees and property in the tornadoes). American Factory deals directly with Neal’s study and hypothesis on industrial innovation clusters.

“In February, I traveled from my home town of Toronto to Dayton to engage in field research for my Strategic Foresight and Innovation MDes project on industrial clusters and historical cycles of innovation (complex but involving Kondratieff and Schumpeter waves that look to the past and anticipate the future). Dayton was the U.S. home of my advisor, Dr. Peter Jones, who felt a study excursion to an American city that experienced a dramatic economic rise and fall could offer useful lessons for cluster development. Peter had called Dayton the Silicon valley of the machine age, and I was curious to see if that was supported by history and what it meant for the next post-industrial age ? — an era that promises the fruition of a raft of presently-dormant scientific and digital revolutions, sometimes known as Industry X.O or Industry 4.0.”

At the time I did not even know about the American Factory film launch, overwhelmed as everyone back home was from a summer of horrible events. So I learned from Neal this Sundance film was now on Netflix, directed by our Dayton friends, the social purpose documentarians Julia Reichert and Steve Bognar.

Of course, this was the documentary that won the Academy Award for Best Documentary this year. I’ve known Julia from their first radical films in the 1980’s and Steve and I were election observers and election/anti-war activists in 2004, and campaigned for Obama in 2008 in the same territory (Greene County, near Dayton).  All of their films are highly recommended by me: https://www.imdb.com/name/nm0717064/