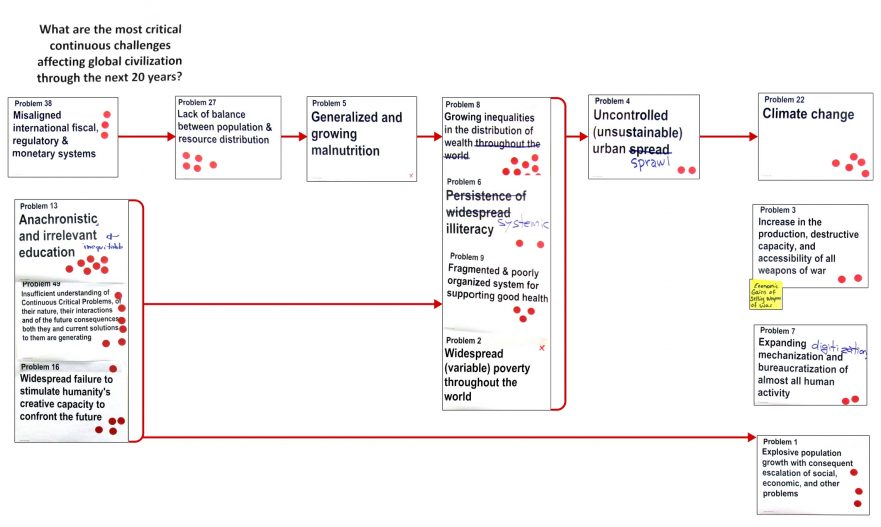 The Global Problematique – A Lindy Megacrisis

We are blessed & cursed to live in unusual times. Nassim Taleb speaks of the Lindy effect, the observation that the life expectancy of a practice (or idea) is proportional to its current age. Long-established practices tend to endure, statistically and culturally. (The Lindy Effect was named after the Lindy Deli in NYC, the last one of which closed soon after Antifragile was published). Don’t bet the Eastern Orthodox Church will disappear during modernism, as it will outlive your lifespan. So will the Global Problematique.

The Year 2020 now represents 50 years since the presentation of The Predicament of Mankind, Hasan Özbekhan’s prospectus to the inaugural Club of Rome. The Predicament assembled the first structured assessment of the highest-concern challenges acknowledged universally across the world, the first model of what today we would call a global challenges report.

I recently held a talk in The Stoa on Living with the Global Problematique, which was about an hour, but still left much unspoken which I’m intending to address in these posts. If you’d like to see the video of the talk please find it with the other amazing Stoa talks. 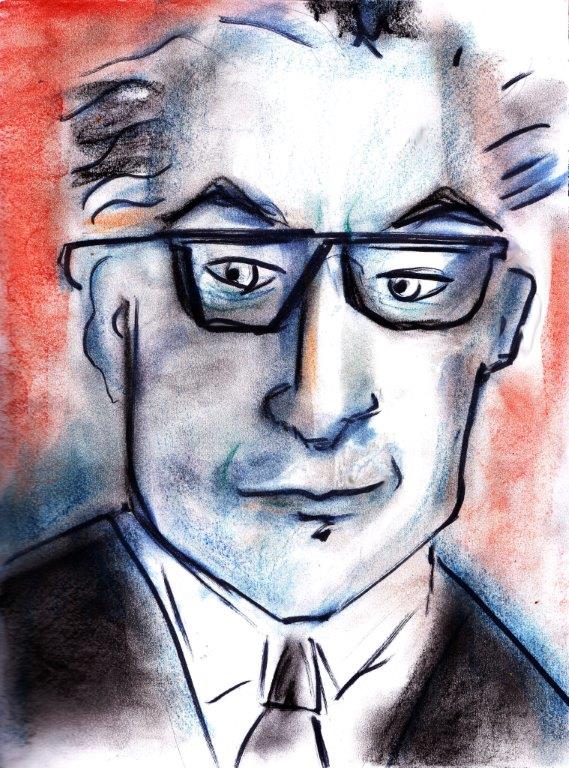 Özbekhan was commissioned by the Club of Rome to prepare the prospectus, presented as the Global Problematique, defined by 49 Continuous Critical Problems theorized then as rapidly merging into a single megacrisis. However, the Club of Rome Executive Committee chose to fund the MIT (Forrester, Meadows) Limits to Growth project instead, largely because of their ready-to-hand technique of system dynamics modeling. Alignment with the Limits to Growth has defined the Club of Rome since this founding event. They have never returned to the intent of the Problematique, which was to develop a continuous, massive stakeholder engagement process that would inspire the evolution of next generation social systems to replace the established values and institutions driving the era of growth and consumption that led to the Problematique. (This was arguably the plan envisioned by Özbekhan, with a team of early social systems thinkers, Alexander Christakis and Erich Jantsch.)

As Özbekhan foresaw, the Problematique continues. The UN acknowledges this implicitly in its attempt to address these issues with the Do-or-Die global project of the Sustainable Development Goals. We live within the complex entailments of increasing population, growth economy, income inequality, urban sprawl, affluence, increasing uses of war, technological efficiency, and so on up to 49. But unlike 1970, we now have methods for engaging with social systems, and reflecting on our own traps of “problem solving” traps that we know only perpetuate these superwicked problems.

Today we can see ourselves collectively entangled in a World System facing a Megacrisis…. as a cluster of inter-related crisis effects, which comes to us through geoscience as the Anthropocene. The Megacrisis is much larger than a set of Ackoffian messes, Rittel’s wicked problems, or the Superwicked problem of climate change.

The Problematique in 1970 noted two CCPs environmental pollution and resource waste) that have resulted in climate effects as an enduring problem system. However, the Problematique demands a way of thinking of the relationships of these effects as consequences of inaction across many of the CCP problems, not as “problems within themselves.” A snapshot of the original 28 CCPs from A General Theory of Planning shows Özbekhan notably observed a significant set of high-leverage concerns, but overall a much smaller problematique than in 1970. 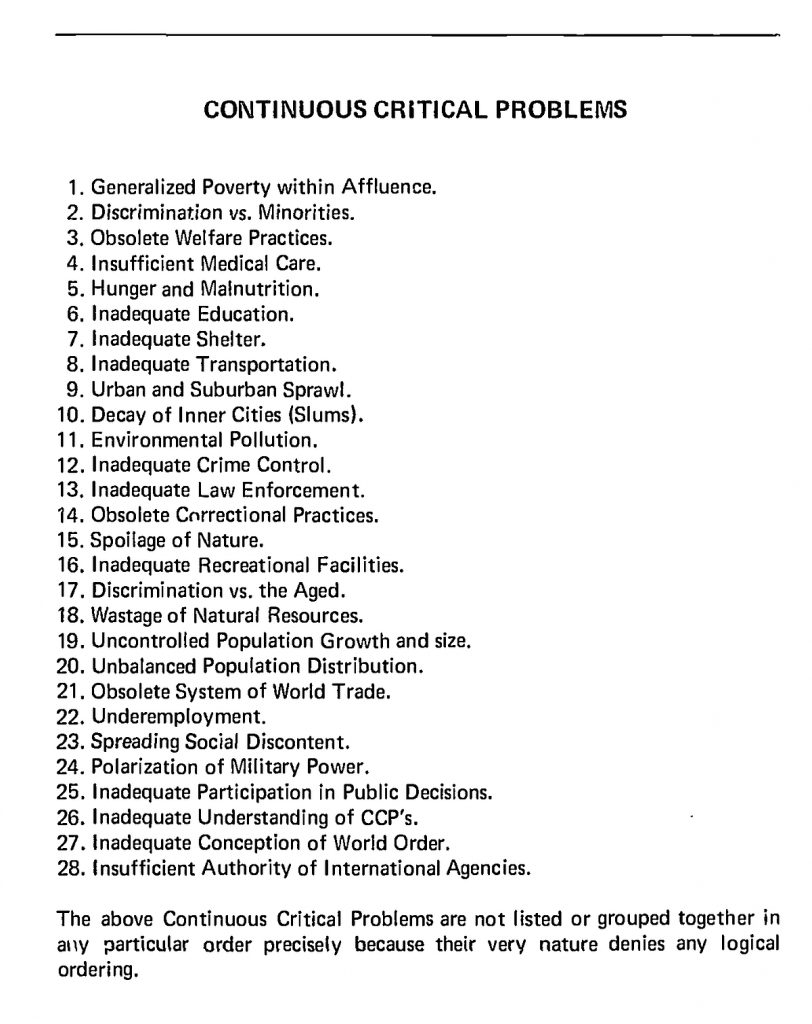 By 1970 the Global Problematique was envisioned as 49 such problem states extended from the 28, including by then inequality, ideological fragmentation and semantic barriers, obsolete institutional arrangements, and the failure to imagine better world order or to evolve new values systems.

The set of 49 CCPs was defined as an “illustrative list,” conceived as problem clusters, including many trees and branches or related complex issues, that entangled with other clusters – wherein all of these were interacting, global and regional, interdependent and intersensitive.  As with wicked problems they are resistant to linear or causal problem resolution, and unlike Rittel’s conception, they extend indefinitely into the future. To the extent they (together) circumscribe our futures, as critical realists or futurists (or both), we have to account for the Problematique in our scenarios and policy framing.

A major insight of the Problematique was that in 1970 the window of time in which any of these major issues could be recognized and ameliorated as discrete defined concerns was soon passing.  Housing, Civil Unrest, Pollution, Poverty, Environment – all were becoming entangled and would evolve from discrete matters of concern to overlapping, related problem clusters. And to – eventually, as we might see today – a non-decomposable problem system of systems, generating itself almost entirely from the outcome effects of multi-effects. A Megacrisis.

Systemic problems overwhelm our cognitive and problem solving capacities, and as individuals we are forced to oversimplify, or technically (as Christakis’ partner John Warfield liked to say) we underconceptualize. To test this notion, ask why we are attempting to address climate change – the ultimate outcome of many years of multi-causal inputs and drivers – with a single-solution silver bullet such as CO2 reduction?  Such underconceptualization is typical in political policymaking, but now has become a preferred mode for activism and even normative science. With a hypercomplex multi-driver multi-century problem system as climate effects, we focus society’s resources to bear on a single preferred “solution.”

Depending on how we view criticality – as temporal leverage (the urgency of NOW), or as feedback imbalances in economy, food production, war policy, population – other drivers impinge on outcomes that are much less survivable than even dire climate scenarios.  Poverty, hunger, and insufficient medical care kill millions, and much sooner, than extreme weather impacts resulting from modeled climate scenarios. The insane rebuilding of the US nuclear weapons stock has pushed the Doomsday Clock to its most critical point ever (100 seconds before midnight). As Hasan also said, to address the temporal crisis, “if something is to be done it needs to be done now –for otherwise we might be confronted by that ultimate experience: N-E-V-E-R.”

But we not only do not speak of these scenarios, we have no social capacity to address them AND the preferred, specified focal problems (climate change, institutional racism, terrorism) that have attained a certain agreement between policy think tanks, activists, and political professionals. So what actions are best to take, for those of us that advise and teach in the contexts across these CCPs, in the broader framing of systems transformation?

I learned everything I know about the context of the Problematique from my doctoral committee mentor, Dr. Alexander Christakis, who (along with Jantsch) was a core member of the original Club of Rome group that argued for a social system engagement. (For the real story, read the transcript of the in-depth interview of Aleco by our good friend Heiner Benking from the 40th anniversary of the Club of Rome.)  The Global Problematique represented the first formal agreement about the high priority global issues of the time – since then we have seen:

With the Global Problematique the societal normative aim was to achieve “ecological balance” through understanding deep system relations and designing new policies. To a great extent this is the normative aim of all these models, even the multinational developmental approach of the SDGs.  Yet attendant to the Problematique, within the Prospectus were the plans and methods proposed by Hasan, all of which are as radically transdisciplinary now as they were 50 years ago, and even more necessary to pursue in today’s complex Megacrisis.