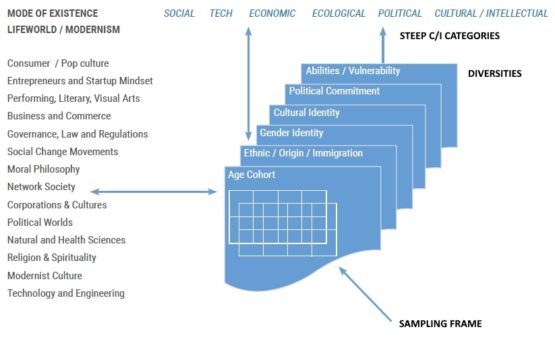 Stakeholder selection may be the most critical step in the design of fair and inclusive dialogues that reflect a community’s contributions and perspectives. This is a classic social systems problem that we resolve through a stakeholder identification and recruiting process that, in Dialogic Design, is called Evolutionary Stakeholder Discovery.

Over the last decade we have been instrumenting, through careful definition of criteria and observation, how stakeholder discovery can be conducted to identify and recruit optimal participants from a theoretical population sample. As a documented case, in 2012 the Strategic Innovation Lab convened a Dialogic Design Co-Laboratory as a multi-stakeholder panel for the SSHRC Imagining Canada’s Future initiative, as one of the six regional cross-Canadian panels. With only 20 stakeholders, we aimed to represent Southern Ontario for the question of future impacts of urbanism in the region for a 20 year horizon.

For this project we selected participants by an evolutionary sampling from a matrix mapping the following characteristics:

A fairly small number of participants can represent, through their experience and lifeworlds, an intersection of multiple perspectives of interest to a targeted challenge issue.  The varieties of content areas are only touched upon in the rough matrix of categories: 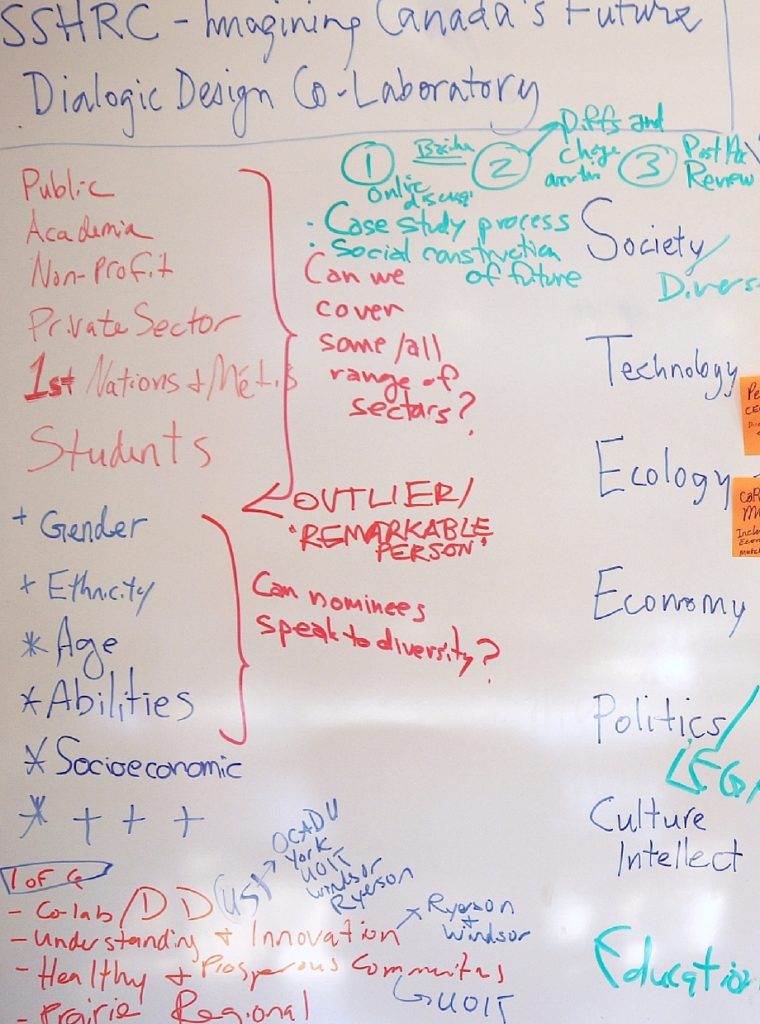 The discovery process reveals stakeholders through a series of “waves” of invitations sent as batches to (known) participants that met subsets (and intersections) of these criteria. Each batch would capture an inclusive set of categories, and upon receiving responses and regrets, we continued to send batches that filled in the gaps of the criteria set, over roughly a 3-week period of recruiting.

If you study the whiteboard notes, it reveals that some categories may be notably missing. We did not select for political perspectives – it was not considered relevant to the question at the time. Today I would include a political spectrum, with a view toward Canada’s multiple parties and contexts, and the political framing of the context of “progress” in which many of the ideas in urbanization are inherently grounded.

This co-lab was a “consultation” for research and not an engagement of stakeholders in which commitments were surfaced. In any stakeholder discovery, we would attune the sampling for knowledge and power  appropriately. Power / influence was not a significant factor in this project or sample, but in many political or organizational contexts, ranges of power with respect to type and influence would also be carefully considered.

One of the emerging complexity challenges that arises in this approach is that we continue to define the focus question of interest to the invited participants as we sample. The variance in the question itself is apparent in the image below, showing options in the question that might skew the stakeholder recruitment or proposed participants.

Of course, a traditional social sciences research sampling would never allow this. However the Evolutionary approach, consistent with Third-Phase(or post-normal) Science, ensures that the evolutionary discovery returns the products of our learning to the context of the dialogue itself. We can see this as a classical wicked problem dynamic, where the problem frame shifts a bit as we discover the stakeholders interested in the initial framing. Working with a core group (in this case, a group consisting of 5 VPs of Research from our collaborating universities) we continually reviewed the stakeholder selections and triggering question, adjusting the question as we understood the variety of interests identified with participants.

This methodology creates a lot of extra work in planning and recruiting. And the end result makes all the difference. The social system of engagement reflects the social system of action – if it doesn’t, then all you have done is convene yet another talk. The ability to choose people with skin in the game, “committed participants,” is central to this sampling process. What we have done is to operationalize the axiom from Search Conferences, often stated by Marv Weisbord as “getting the whole system in the room.” They accomplish that aim by over-recruiting, including as much of the total sample as possible for a multi-day engagement, an outcome that is becoming ever-harder to carry out due to our culture’s hyper schedules. But with large groups (50+ participants) there will always be over-sampling of a dominant culture, which reduces the power of the marginal voice in a deep listening context. Also the analysis become exponentially harder if these perspectives are actually being recorded and analyzed, as we do in most cases.

In my view sampling for requisite social variety, not facilitation technique, is 90% of the future success of the engagement. This secures the quality of the content through an articulated range of perspectives (requisite variety) and the reasonable belief in their actual commitment to the central question for the dialogue. If you have the right people in the room, commitment to decisions and actions can be made and held.

If you can discover and invite the right variety of perspectives with respect to the question or issue, all you need to do is convene their dialogue with a fair democratic participation where every person has an autonomous and authentic say in the deliberations. This may not lead to “problem solving” especially in a first engagement. But it will wake people up to the points of view they have been blissfully able to ignore. It enables astonishing conversations with real commitment in speaking.